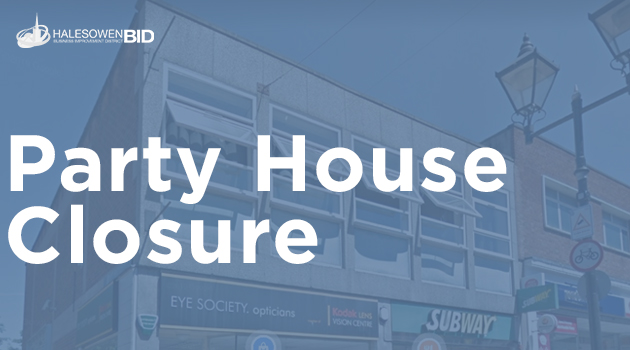 Halesowen BID have assisted West Midlands Police in closing down a ‘Party House’ to rent in the town centre. The police and the BID team had received repeated complaints from neighbours of anti-social behaviour, criminality and suspected drug-related activity.

The BID supported the police by drawing up integral paperwork and gathering the necessary local support to ensure action could be taken.

Officers had directly responded to at least 20 reports of anti-social behaviour at the property including allegations of knife crime, underage drinking, underage sexual activity, robbery and drug-taking in the last 12 months alone.

Many more concerns have been raised with the local authority by troubled residents. And the ongoing issues have been exacerbated by the current Covid-19 restrictions.

On 7th August police made an application to Wolverhampton Magistrates Court for the property in Peckingham Street to be closed.

The order was granted for three months and states that anyone other than those named on the order are prohibited from entering the address. Anyone found breaching the order may be arrested.

“Residents are likely to see an increased police presence in the area in the coming weeks as we continue to monitor the address and ensure the order is being adhered to – please do not be alarmed.

We’re pleased to be able to support our local traders in this manner and to ensure that signs of anti social behaviour and illegal activities are removed as we work to create a safer town.

Halesowen Town Centre was once a thriving business community but in recent years has faced a number of new challenges. This includes competition from larger shopping malls and online shopping. Halesowen is still regarded as one of the hidden gems of the Dudley Borough and has a wealth of history and character. An opportunity has arisen to revitalise the Town Centre in the form of a Business Improvement District (BID). As a community we can unlock the potential that Halesowen has to offer.